Following up on a previous Smart Brief announcement, regarding upcoming changes in the contractors who will serve as the Durable Medical Equipment Medicare Administrative Contractors (DME MACs), AOPA has learned about additional details regarding the transition of DME MAC Jurisdiction A and Jurisdiction B responsibilities. The denial of the NGS protest of the Jurisdiction B […]

CGS to be the New DME MAC for Jurisdiction B 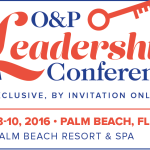 The 2016 O&P Leadership Conference: Another Success

O&P industry leaders returned from the January 8-10 2nd O&P Leadership Conference in Palm Beach with comments such as “by far, the most valuable event I’ve had the privilege to attend in my career”, “truly a great session”, and “extremely helpful”. With a lineup including former Senator Bob Kerrey, Political Analyst Charles E. Cook, Jr. and Healthcare Futurist […]