On October 19, AOPA hosted a press event at the National Press Club in Washington DC, to share the important research from the RAND Corporation on the economic value of advanced prosthetics.

Dr. Soren Mattke from RAND presented the findings of this recently published research that concluded that microprocessor knees are associated with improvements in physical function and reductions in falls and osteoarthritis, and that the economic benefits are in line with commonly accepted criteria for good value for money by U.S. payers.

Dr. Ken Kaufman, PhD of the Mayo Clinic, shared his research on health outcomes for those living with limb loss, including the cost of care broken down by K-level, and the costs of falls, and the large number of amputees who never receive a prescription for a prosthesis. Prosthetic users Christopher Allen and Peggy Chenoweth discussed how they have benefited from advanced technology in their everyday lives.

The video was livestreamed on Facebook and is now available to view. The Power Point presentations used are available upon request. 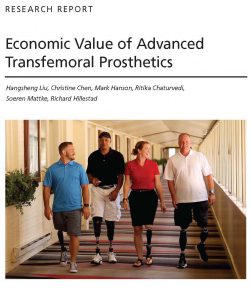 About the RAND Corporation study
Due to recent advances in technologies, prosthetic knees allow for more-dynamic movements and improve user quality of life, but payers question their value for money. To explore this issue, RAND simulated the differential clinical outcomes and costs of microprocessor-controlled knees (MPKs) compared with non-MPKs (NMPKs). They conducted a literature review of the clinical and economic impacts of prosthetic knees, convened technical expert panel meetings, and implemented a simulation model over a ten-year time period for unilateral transfemoral Medicare amputees with Medicare Functional Classification Levels of 3 and 4.

They found that compared with NMPKs, MPKs are associated with sizeable improvements in physical function and reductions in incidences of falls and osteoarthritis. The simulation results show that over a ten-year time period, compared with NMPKs, MPKs are associated with an incremental cost of $10,604 per person and an increase of 0.91 quality-adjusted life years per person, resulting in an incremental cost of $11,606 per quality-adjusted life year gained. The results suggest that the economic benefits of MPKs are in line with commonly accepted criteria for good value for money and with those of other medical devices that are currently covered by U.S. payers.

This study is just part of AOPA’s commitment to advancing O&P research. See all of AOPA’s Research Initiatives.

Press about the Event so far: