Spending While You’re Here
You can exchange foreign currencies at most large banks, tourist centers and at agencies in the terminals of major airports. But you’ll receive the best rate using an automated teller machine (ATM). They’re everywhere, though some banking networks charge fees of $1-2 per transaction.

Another way to optimize the exchange rate is to make purchases with a credit card. Major credit cards are widely accepted across the U.S. In fact, some businesses, such as hotels, require a credit card to confirm a reservation. Keep some U.S. currency or traveler’s checks on hand for use in an emergency.

Taxes
The U.S. doesn’t have a national sales tax comparable to the value-added tax (VAT) or goods and services tax (GST) found in other countries. Instead, individual U.S. states and localities (counties and cities) set their own rates of taxation.

Thus, the sales tax you may be required to pay depends on where you are and even what you’re buying. Sales tax on food items, for example, may be lower than for merchandise; tax on gas is often higher.

Keep in mind that sales tax is never included on a price tag. Since sales tax isn’t collected on a national level, you can’t obtain a refund on departure. However, many states don’t charge tax on items shipped out of state. Inquire at the store, especially if you are making a large purchase.

Medical facilities can be found in all hospitals as well as urgent care clinics. Hospital emergency rooms and urgent care clinics do not require appointments, though in non-life threatening situations, it may be helpful to call ahead. Health care is superior in the U.S. but it can be very expensive because there is no universal health care. Traveler’s health insurance should be purchased prior to travel to the U.S. in case of an emergency. Prescription medication should be brought from home and carried in its original, labeled container. The nationwide emergency phone number for police, fire, and ambulance is 911.

U.S. culture is as diverse as the geography, and what’s considered good manners often changes from region to region. Americans are generally an easygoing people – famously open and welcoming – but observing a few customs will guarantee a successful trip.

Dress is generally casual; business dress is sometimes required in high-end restaurants and private clubs, but less frequently than even a few years ago. Nevertheless, if you are attending a special event, it’s probably best to risk being overdressed, rather than too casual.

Tipping is customary for service industry professionals: waiters, bartenders, taxi drivers, hairdressers, hotel porters, and chambermaids, coatroom attendants, parking valets and airport skycaps. Tips are an important part of their income. The tipping custom in the U.S. is 15 percent of the total bill – 20 percent or more for exceptional service. Tip coatroom attendants $1 per garment; parking valets $1-2 when you drop off your car and another $1-2 when you pick it up; hotel porters and airport skycaps at least $1 per bag; and hotel chambermaids’ $3-5 a day.

Look before you light up. Smoking is much less accepted in the U.S. than it once was. In fact, it’s restricted in many establishments.  Smoking is prohibited in guest rooms, restaurants, lounges, meeting rooms and most public spaces.  Check for no-smoking signs and never light up unless you’re sure it’s allowed. It’s polite to ask for permission if you’re in the company of others.

Every culture has some quirky do’s and don’ts. Here are a few of America’s: Observe queues and don’t cut in line. Be aware that Americans are fanatics about showering and hygiene. Keep your voice down when talking on a mobile phone in public. And only use your phone in appropriate places where others will not be disturbed by being a party to your conversation.

Shaking hands is the usual form of greeting, but many Americans are quite casual and demonstrative: it’s not altogether unusual to receive a hug and sometimes even a friendly kiss on the cheek from someone you’ve only just met.

Internet service in the U.S. is widespread and fast. Wireless Internet is available in hotel and guest rooms at the Mandalay Bay.

Make calls from any public phone using a pre-paid phone card or phone credit card. Pre-paid phone cards generally offer the best rate, especially for international calls. Pick one up at airports, hotels, bus stations, grocery and convenience stores. Purchasing or renting a mobile phone that operates on a U.S. network is another, pricier option.

The U.S.’s transportation system is well maintained and extensive. Go by airplane, bus, train or car. But avoid hitchhiking anywhere in the U.S.; it’s not efficient or safe.

Given the country’s size, flying is the fastest way to get from one place to another. Most interstate flights connect through main airports in large cities known as “hubs.” Even if you’re flying to a destination within the same state, you may have a more or less lengthy stopover in a hub.

The U.S. is a car culture and driving is often the most convenient and economical way to travel. From a practical standpoint, public transportation within cities isn’t highly efficient except in large metropolitan areas. So even if you’re jumping between cities by plane, you may want to rent a car on arrival and drive. You’ll find car rental outlets at all major airports. Indulge in that uniquely American pastime, the road trip. Set your own pace, wander down abandoned back roads, stop whenever and wherever you like. It’s prudent to take the LDW/CDW (loss/collision damage waiver) insurance on your rental.  The U.S. interstate highway system is excellent and well maintained. Gas prices are lower than most international visitors are accustomed to paying. Gas stations are plentiful along highways and in cities, and can usually provide maps and road directions, too. Speed limits vary on American highways, but are typically 55-75 miles per hour. Speeds are posted and often enforced by highway patrol officers. Driving under the influence of alcohol or non-prescription drugs is a serious offense in the U.S. and can result in inconvenience, embarrassment and expense (and criminal charges?).

Liquid measure in the U.S. is generally based on number of fluid ounces. Beverages are usually measured in fluid ounces with single servings ranging between 8 and 16 ounces. Milk is usually sold in cups or half pints, pints, quarts and gallons. Water volume for bathtubs, ponds, swimming pools, etc., is usually described in gallons.

Weight in the U.S. is measured most commonly in ounces and pounds. 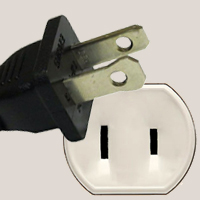 Voltage
Don’t forget to pack an AC and plug adapter – the U.S. uses 110 to 120 volts and electrical plugs with two flat parallel blades.