Saeed Zahedi, OBE, FREng, BSc, PhD, FIMechE, CEng, RDI
Sir Saeed Zahedi is a biomedical engineer and innovator who is currently the Technical Director at Chas A Blatchford & Sons and a visiting professor at Bournemouth University’s Design Simulation Research Centre. Zahedi is author of over 125 publications related to prosthesis research and has patented over 35 inventions. He is best known for his work in the development of the world’s first fully integrated, microprocessor controlled, lower limb system, Linx. He was knighted “for services to Engineering and Innovation” in 2017.

Van Phillips, Flex-Foot
Van Phillips holds approximately 100 U.S. and international patents but his most famous invention is  the Flex-Foot, an energy-storing carbon graphite foot, that stored kinetic energy allowing the wearer to run and jump. Approximately 90 percent of Paralympics participants use a variation of the original Flex-Foot design, as well as thousands of people around the world.

Martin “Marty” Carlson, CPO(E), FAAOP, Tamarack Flexure Joint
Marty Carlson is owner and chief engineer of Tamarack Habilitation Technologies in Minnesota and developed the Carlson AFO Modification technique, the Gillette orthotic seating system, Tamarack ankle joints, and others. The Tamarack Flexure Joint was introduced in 1994 are considered the industry’s most widely used thermoformable orthotic joint option for custom and semi-custom articulating ankle-foot orthoses and other lower and upper limb articulating brace configurations. The simplicity, durability and low cost of the Tamarack Flexure Joint has kept the costs of providing articulated orthoses down.

M.E. “Bill” Miller, CO, The Boston Brace System
In 1975, Bill Miller developed a systematic, repeatable process for the orthotic management of idiopathic scoliosis, while working at Children’s Hospital of Boston.  The use of a symmetrical form that is custom fitted to the patient according to their specific presentation and curve was unique. The Boston Brace System is the most studied and is used throughout the world. Through the use of CADCAM and shape capturing technologies, the Boston Brace has evolved to be a truly 3D custom fabricated device

Kelly James, P.Eng., C-Leg
Kelly James, an engineer at the University of Alberta in Canada, developed the C-Leg, the first leg with microprocessor-controlled swing and stance phases, in the early 1990s. Ottobock bought the patent in 1992 and launched the groundbreaking technology.  For over 20 years C-legs have provided patient and practitioners with better opportunities to safely and successfully treat knee disarticulation and transfemoral amputees.

The Ralph R. “Ronney” Snell, CPO, FAAOP, Legislative Advocacy Award recognizes individuals who have made valuable contributions toward advancing the legislative and regulatory goals of the O&P field by motivating members of Congress and other decision makers to take action on behalf of O&P.

Aaron Holm
Aaron Holm has been a longtime regular at the annual AOPA Policy Forum, and is active in state level advocacy in Minnesota. He founded Wiggle Your Toes, a non-profit that assist individuals who have suffered limb loss through consultation, planning and referrals, while in the hospital after losing both legs above the knee. He has participated in the fight against the draft Lower Limb LCD of 2015, including the rally at the Department of Health and Human Services. He has testified at a Congressional briefing on his experience as an amputee.

Adrianne Haslet
Adrianne Haslet survived the Boston Marathon bombing, as a below knee amputee and outspoken advocate. As a professional ballroom dancer, she famously danced again. She has worked tirelessly to advance the O&P advocacy agenda by testifying before Congress on our behalf, participating in Congressional Briefings, being part of the rally at the Department of Health and Human Services back in 2015 and joining us for our media briefings.

The Edwin and Kathryn Arbogast Award and the Otto and Lucille Becker Award were founded in 2012, made possible by a special endowment by Becker Orthopedic and WillowWood. These awards honor two meritorious scientific papers submitted for presentation as a poster at the AOPA National Assembly, to encourage students and residents to display outstanding posters. The Otto and Lucille Becker Award is awarded annually for the best orthotic abstract submitted, and the Edwin and Kathryn Arbogast Award for the best prosthetic abstract submitted by a qualifying student or resident. 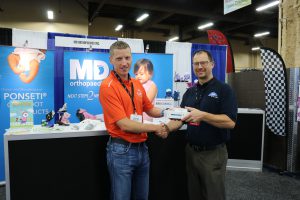 Thranhardt Winners
Launched by a gift from J.E Hanger in memory of Howard R. Thranhardt, CP, the series offers an honorarium to the winners. The series recognizes individuals committed to advancing O&P education and research. Winners of the Thranhardt Lecture receive an award of $500 each.
-Shenan Hoppe-Ludwig, CPO, “The Micro-Processor Controlled Orthosis: What is the Impact to the User Versus the Stance control Orthosis and Conventional Locked KAFO”
-Andrea Giovanni Cutti, PhD, “Reference Values for Temporal Gait and Loading Symmetry of Lower-Limb Amputees Can Help in Refocusing Rehabilitation Targets”

Hamontree Lecture Winner
The Sam E. Hamontree, CP(E), Business Education Award was created to recognize the best business education paper, idea and/or proposal submitted for presentation. This award is a counterpart to the Thranhardt Award given each year to the best clinical abstract
Ryan Ball, “Competitive Differentiator: Executing a Data-Drive Growth Strategy in O&P”

“Show your Vegas Style” Contest during the Welcome Reception 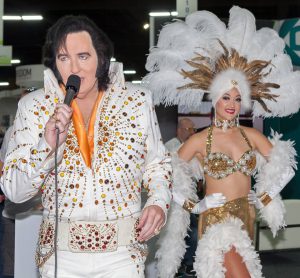